Obsah
AgentFly is a multi-agent system enables large simulations civilian and unmanned aviation. The system integrates advanced flight path planning, decentralized collision with detailed models of airplanes and the environment. AgentFly can operate in fully distributed mode on multiple computers. This approach allows you to perform simulations involving very large numbers of aircraft. The system allows to measure and evaluate a number of parameters and characteristics of simulation, making it possible to analyze in detail the conduct simulated air traffic, such as. Fuel consumption, traffic density violations.

Every aircraft in AgentFly is stimulated by an agent responsible for path planning and negotiation with other aircraft (ie. The corresponding agents) of detected conflicts in planned routes. This allows the safe and collision-free flight numbers of aircraft in the same airspace.

AgentFly has been designed to support the simulation of airspace across the planet, with positions of aircraft by their GPS coordinates.

While planning your route, the aircraft must take into account not only its mission waypoints (high-level plan), but also other factors such as. Terrain, permanent or temporary exclusion zone (Special Use Airspace, SUA), or weather area, namely wind (all the necessary data were provided by the Federal Aviation Administration, FAA). The simulated aircraft must also respect the physical limitations of real machines, as specified in the database Base of Aircraft Data BADA (data provided by EUROCONTROL).

To ensure flight safety and keeping safe distances are detected conflicts in the flight paths of aircraft handled automatically, either in a cooperative or non-cooperative mode. Selecting a mode depends on the ability or willingness of the airplanes to communicate.

AgentFly used methods of automatic load balancing to ensure an efficient execution of the distributed simulation on the number of computers. The system was successfully used for the simulation of more than 50,000 airplanes flying in the airspace of the National Air Space NAS. Simulations based on real data about air traffic in one day. Data provided by FAA. During peak air traffic AgentFly odsimuloval about six thousand planes at any time.

AgentFly also provides tools for prùbìžný data collection and subsequent evaluation and analysis of the behavior of the system under various conditions. This makes it possible to perform measurements and experiments covering a variety of situations in air traffic and system configurations. 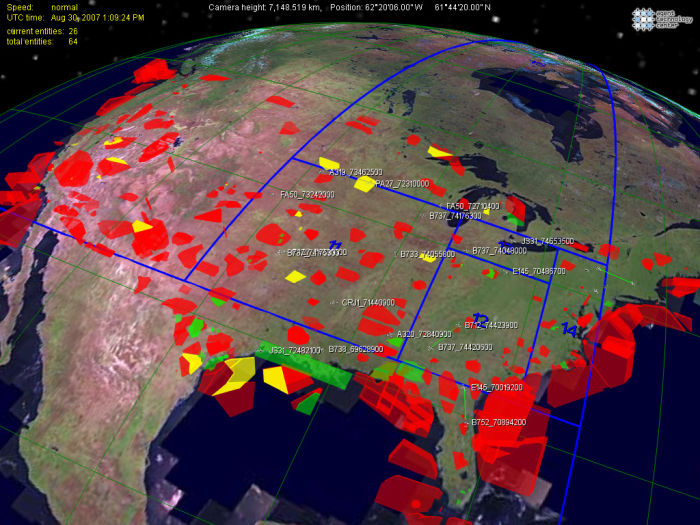